You cannot cure Alzheimer’s disease but growing scientific evidence indicates that by keeping your brain, your body and your heart healthy you can reduce your risk of developing it and other types of dementia.

Think of 5 steps you can take to reduce your risk

Include them into your daily routine, remind yourself to perform one task in each key area. 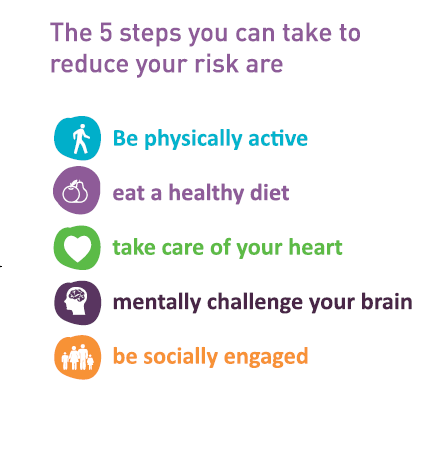 Doing at least 30 minutes of moderate intensity aerobic physical activity 3- 5 days a week such as:

– Take the stairs instead of the lift or go for a walk at lunch;

– Build it up over time and if you have any doubts talk to your doctor.

Please note: Build it up over time and if you have any doubts, talk to your doctor.

For suggestions and practical tips to help get you active visit www.getirelandactive.ie What Can You Do to Keep Your Brain Healthy? via Hellobrain.eu

Take care of your heart – Have regular health checks with your doctor to ensure your blood pressure, cholesterol and blood sugar levels are at a healthy range;

– If you smoke, try to give them up, it’s never too late;

For information and practical suggestions to help you manage cholesterol, your blood pressure and how to keep your heart healthy, speak with your doctor and visit www.irishheart.ie Eat a healthy balanced diet for brain and heart health.

– Eat plenty of fruit and vegetables, 5 servings a day

– Include fish in your diet, particularly oily fish such as salmon, mackerel or sardines

– Cut down on salt intake

– Reduce fat, saturated fat and sugar in the diet

For information about healthy eating and recipe suggestions visit www.safefood.eu Connecting and interacting with social activities helps to build strong connections in the brain.

– Phone or meet family and friends regularly, share news and keep in touch

– Join a group such as a walking club, book club or sporting club

– Go to the theatre, museum, the cinema or to a concert with a friend

– Volunteer with a favourite charity or local community group Train your brain with new activities to help build new brain cells and strengthen connections between them.

– Take up a hobby such as painting, woodwork or craft work

– Learn a language, an instrument or to dance

– Play board games or cards with a club or with friends

Your local newspaper and radio stations are often a great source of information about clubs, groups and social activities taking place in your area.

Growing scientific evidence indicates that lifestyle and health choices can help to keep our brain healthy and reduce our risk of developing dementia in later life.

Lowering our risk does not mean we can definitely avoid dementia.

Dementia cannot yet be prevented our cured. But evidence does suggest that by making small changes to the way we live, we can reduce our chances of developing dementia or at the very least, improve our health and well-being.

For more information about the scientific evidence visit:

A risk factor is something that can affect your chance of getting a disease such as dementia. There are some risk factors we cannot control include our age and genetics and there are other risk factors we can change including our diet and increasing how much exercise we do daily.

The most important thing is not to worry alone, if you have concerns talk to your doctor or call the Alzheimer National Helpline on 1800 341 341.

Risk factors we cannot change which are linked with dementia include: Age is the most significant risk factor for developing dementia. Dementia can occur at any age, but is not as common in people under 60 and becomes more common as we age. Dementia affects 1 person in 7 aged 65 to 70 years and this rises to 1 person in 5 over 80 years.

While it is known that age is a risk factor, developing dementia is not an inevitable part of ageing. Many people do not develop dementia at any age.

You may be concerned that you can get a form of dementia if you have a family member who has a type of dementia or if you can pass on the type of dementia to your children. However the majority of dementia’s are not inherited – which means the gene being passed down from generation to generation, it depends very much on the particular cause of dementia.

A gene called apolipoprotein E (ApoE) has been linked to Alzheimer’s and vascular dementia, however the role it plays is not yet fully understood. People with this gene have not developed dementia and people who do not have it, have developed the condition. Even where this gene is present, there is only a slightly increased risk of developing the condition than the average population.

There are some rare forms of dementia that can be passed from generation to generation. It is important to know that these genetic factors only cause the condition in a very small number of families. One such form is Familial Alzheimer’s. This very rare form of dementia affects younger people and can result in people in their 30’s and 40’s developing the condition. Where Familial Alzheimer’s is present, there is a 50% possibility of passing on the gene to the next generation who would then eventually develop the condition.

It is important to remember that early onset Alzheimer’s – that is where the condition develops in people under 65 – is rare and not all of these cases are thought to be inherited.

Some forms of frontal-temporal dementia or Picks condition have a strong family history and in some cases a genetic link has been found. These inherited types of dementia are rare.

Specific medical conditions can increase a person’s chances of developing dementia. These include Huntington’s disease, Down syndrome and HIV.

Risk factors we can change which are associated with dementia include: There is increasing evidence that our lifestyle can impact our chances of developing dementia.

Has an extremely harmful effect on the heart, lungs and vascular system. Smoking is a significant risk factor in developing a range of illnesses including dementia. You will always benefit from giving up smoking.

Excessive alcohol over a long period of time can increase a person’s risk of developing a form of dementia called Korsakoff’s syndrome. However, there is some research that suggests a moderate amount of red wine (which contains antioxidants) might help to reduce our risk of dementia.