What is Dementia and Alzheimer’s Dementia is the name for a range of conditions that cause damage to the brain. This damage can affect memory, thinking, language and the ability to carry out everyday tasks. There are many conditions which cause dementia. Alzheimer’s is the most common cause. Vascular dementia, dementia with Lewy bodies and Frontotemporal dementia are other causes.

Sometimes a person may experience a mix of two types of dementia and this is called mixed dementia. Some people may be diagnosed with dementia and it may not be possible to confirm if it is Alzheimer’s or another cause of dementia.

There are many diseases that may cause dementia. The most common causes include Alzheimer’s disease, vascular dementia, dementia with Lewy bodies and Frontotemporal dementia. 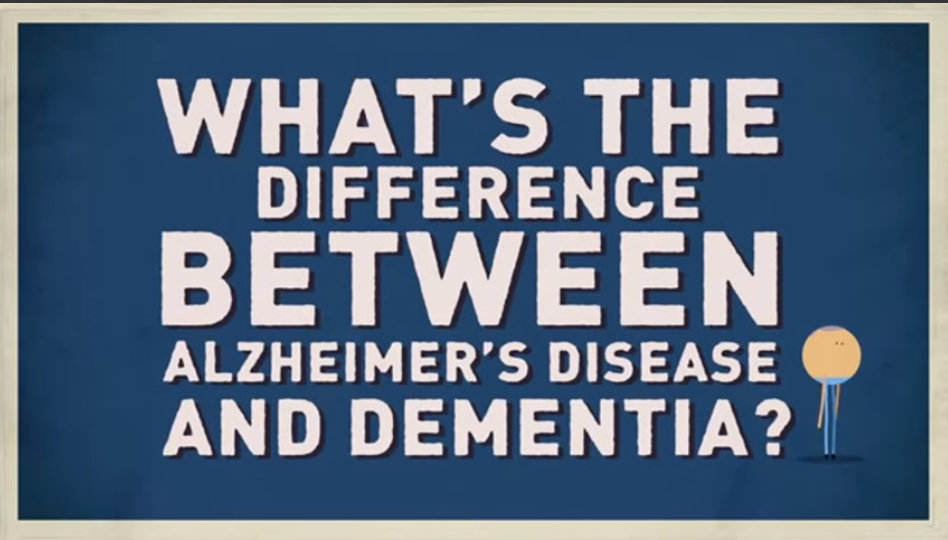 What is the difference between Dementia and Alzheimer’s disease? Via by Trinity College

Alzheimer’s disease is the most common and well-known cause of dementia. It is thought to cause over half of all cases. It is recognised by the build-up of protein in the brain which forms plaques and tangles that stop the brain working as it should.

Short term memory loss is often one of the first symptoms of this disease; however there are a range of early signs and symptoms including

It is important to remember that symptoms vary from person to person as everyone’s experience with the disease is unique.

One of the first things I noticed, apart from her memory, was her ability to coordinate daily tasks was deteriorating. When she cooked a meal, she might cook the vegetables first and it could be hours afterwards that she would put the meat on.

Vascular dementia is the second most common type of dementia and it occurs when the blood supply to the brain is damaged. There are two main types of vascular dementia; one caused by stroke (Multi-infarct dementia) and the other by small vessel disease (Subcortical dementia).

Multi-infarct dementia is a type of vascular dementia that is caused by small strokes. The strokes can be so tiny that no-one notices them happening, but the person may get worse quite suddenly and then not change again until the next stroke happens. As a result, the progression of this dementia is often described as happening in steps rather than steady gradual changes, such as in Alzheimer’s disease.

Subcortical dementia is another type of vascular dementia and is caused by very small blood vessels that are in the inner parts of the brain.

People with vascular dementia can often experience the following symptoms:

Frontotemporal dementia, including Picks Disease is a rare type of dementia which is caused by damage to different areas of the frontal and temporal lobes of the brain. During the early stages, a person’s memory may be fine but their personality, behaviour and language skills can change.

This dementia often may cause a person to:

The progression of this dementia is unpredictable and in the later stages symptoms are similar to those of Alzheimer’s disease.

Other forms of dementia

Other forms of dementia include alcohol-related dementia such as Korsakoff’s syndrome and Creutzfeld-Jacob Dementia. Some people with Down’s syndrome also develop dementia in middle age.

If you or your loved one are experiencing changes in your memory, mood or ability to manage, don’t worry alone. Take the next step and do something about it.

Below you will find information about early signs and symptoms, when you should visit your doctor, how a diagnosis is made and what treatment is available. You will also find tips on coping with memory loss.

Early signs and symptoms may include:

Most people will experience a number of these signs, and they will find they are having increased difficulty over time. In general, signs and symptoms emerge gradually. This can be difficult for both the person who is experiencing changes and for their family and friends.

There is no one test used to diagnose a type of dementia. Rather, the diagnosis involves a range of assessments and tests and this can mean that confirming a diagnosis can take time, particularly in the early stages.

A diagnosis of dementia usually begins with a General Practitioner, GP.  It can be helpful to make a note of the changes causing concern before your visit to help you to talk to the GP about them. Perhaps keep a diary to help you to do this.

The GP will generally begin an assessment by ruling out other possible causes of symptoms you are experiencing; this may involve running some tests including blood tests and memory tests as well as an overview of your general health. Some other possible causes of the symptoms you are experiencing include thyroid disorders, vitamin deficiency and side effects of some medication.

The GP may refer to a consultant who will conduct a full assessment to try to establish the cause of the symptoms.   Click here to find out who’s who in dementia care, as they can work with you to help you understand the diagnosis.

If you are under 65, you will be referred to a neurologist or a memory clinic. If you feel a referral to a specialist would be helpful you can discuss this with the GP.

The consultant will conduct a full assessment to try to establish the cause of the symptoms. They usually work with a specialist team and you may see a number of people from this team. This process usually includes

The doctors will work directly with the person who is experiencing changes. The doctor may also ask family members to talk about any changes they see or any concerns they may have.

After the assessment, the consultant will draw together all the results and determine what is happening. It may be that the assessment is repeated at a later date in order to identify further changes and confirm a diagnosis.

What if a diagnosis is made?

A diagnosis of dementia can come as a shock, no matter how much it is expected. It is hard for everyone concerned and reassurance and support are vital. The most important thing is to try to be positive and to know that you are not alone. There are people you can talk to and supports and services that can help.

Your GP will be an important person to support you to live well with dementia. You can talk to them about your dementia, about any medications and treatments you may be prescribed, about areas such as driving and about any symptoms that may emerge. Each person’s experience with dementia is unique to them. Dementia may last many years, sometimes progressing faster, sometimes more slowly. This means that it is not possible for anyone to tell you exactly how the condition will progress and how long a person can live with dementia.

Many people find it stressful that they do not have answers to these questions and that is normal. It is important to understand as much as you can about dementia as it can help you to come to terms with the diagnosis and what may lie ahead. It can be useful to think about the way dementia progresses in stages, however it is important to remember that this is only a guide, some symptoms may appear earlier or later or not at all.

The following provides an outline of the three stages that are associated with Alzheimer’s disease. Following this, there is a note on the progression of vascular dementia, dementia with Lewy body and Frontotemporal dementia which all have specific characteristics associated with them.

The progression of Alzheimer’s disease

In the early stages of dementia changes are slight and it is possible to continue to do lots of things. This typically means a person may:

Many people in the early stages of dementia engage in activities they enjoy but at times they may find it hard and may need to rest more frequently.

As dementia progresses, changes are greater and a person will need more support to help them to manage day to day living. As a person finds it harder to do things, they may lose confidence and withdraw or be upset. Others may feel frustrated and angry and be argumentative or quick to lose their temper.

During the middle stage a person may:

The symptoms and behaviours that can occur during this stage are difficult for both the person with dementia and their families. There are supports and services to help and strategies for coping which are listed at the bottom of this page

During the late stage of dementia, a person will need increasing amounts of support and will gradually become dependent on others for nursing care. A person will become increasingly frail and may walk unsteadily; they may need a wheelchair or be confined to bed. During this stage the ability to fight even simple infections is low.

Typically, a person may:

While a person with late stage dementia may have difficulty communicating, they will often respond positively to affection, a smile, and a soothing voice. Music, scent and hand massage can bring comfort and enjoyment.

The progression of vascular dementia

Vascular dementia is generally caused by a stroke or a series of small strokes. As a result this type of dementia may progress in a ‘stepped’ manner, which differs from the more gradual progression of Alzheimer’s disease. Symptoms may appear to suddenly worsen due to a stroke and then remain level for a period of time. It may be months or years until the next stroke occurs and symptoms can then worsen. Where vascular dementia is caused by a series of small strokes, then symptoms can emerge in a more gradual way.

People with vascular dementia tend to maintain their personality and emotional responsiveness until the later stages of the condition. This can mean that people are more aware of their condition and can be more prone to depression than people with Alzheimer’s disease.

In general people with vascular dementia live for around five years after symptoms begin. In many cases, the person’s death will be caused by a stroke or heart attack.

The progression of dementia with Lewy Bodies

Half or more of people with dementia with Lewy Bodies will also develop symptoms of Parkinson’s disease. These include slowness of movement, stiffness and tremor. Other symptoms include difficulty judging distances, falls and fainting. Visual hallucinations, paranoia and delusions may also emerge.

In the early stages of this dementia, the abilities of the person may fluctuate drastically, even during the course of a day. This can be very confusing for all concerned.

In the later stages, this dementia progresses in a similar way to Alzheimer’s disease. People usually live for six to twelve years following onset of symptoms.